As one could assume from the last post, our Halloween celebrations were far from over! In fact, the real fun was just beginning!

While getting ready for our Trick or Treating Party, we made sure to carve time out to attend an event my siblings, cousins and I attended for years as children. From the time I can remember, my grandparents have always lived in an incredible neighborhood, outlined by a horse trail and surrounding a barn, packed with horses and all the fun that goes with it!

Every Halloween, all of the families in the neighborhood (and grandkids) would go to the barn for a Halloween Bash! There was a full costume parade, bobbing for apples contest, carnival games in empty horse stalls, and more candy than you could imagine!

Two of my siblings and I at the Barn Party! Always knew I was a little witchy!

When my grandma sent a text to our group family text that the Barn Party was on for this year, we all immediately made sure we were on the list!! After soccer in the morning and running some necessary party errands – more spiders, ice cube eyeballs, and new batteries for strobes – we started to get in our Halloween Party gear! As you can imagine, by this time, we had the bug consume DOWN! 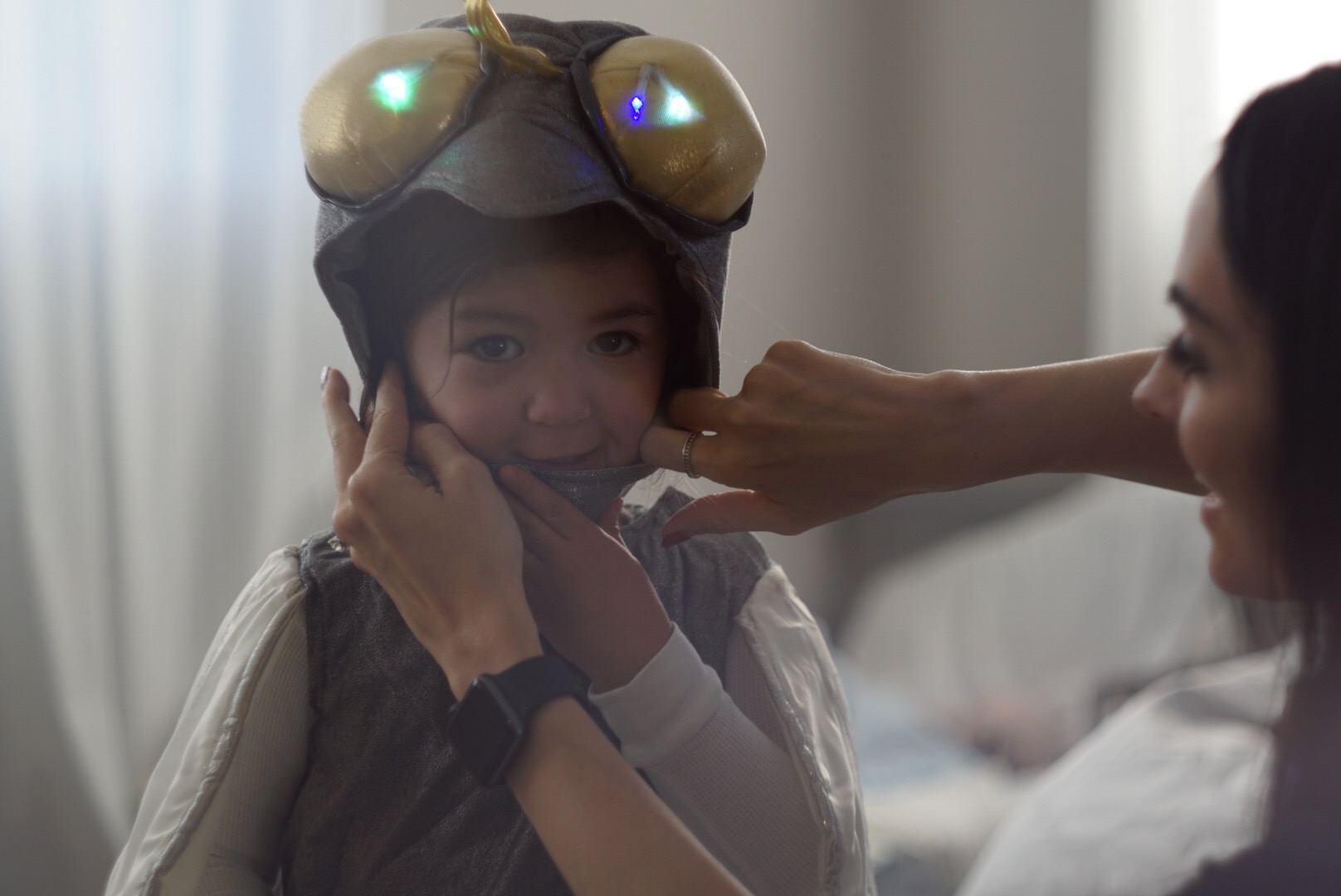 Once we were all bugged out, we were on our way to the Barn – but not without doing a little live video on the drive!

The moment we arrived, and this little bug stepped out of the car, the DJ was obsessed with Oliver’s costume- over the mic he went on for at least 2 minutes about how cool the outfit was! Naturally, the lightning bug was the winner of the costume contest and won an entire $1 Dollar Bill!!!  W I N N E R !!

Luckily, Oliver’s cousin hadn’t arrived yet, because these two would have been neck and neck! Do you die over this adorable Skunk!?!?

Because we were at a Barn, we absolutely had to feed the horses!! Oliver was loving them, and so was mommy! I definitely wasn’t the horse whisperer, but I tried to be tough – until the horse decided to slobber all over my bag! HAHA!

Since mommy wasn’t the winner of the costume contest, I stole my nephew’s Championship Belt from his Connor McGregor costume – it was a great accessory for the belly! HaHa! 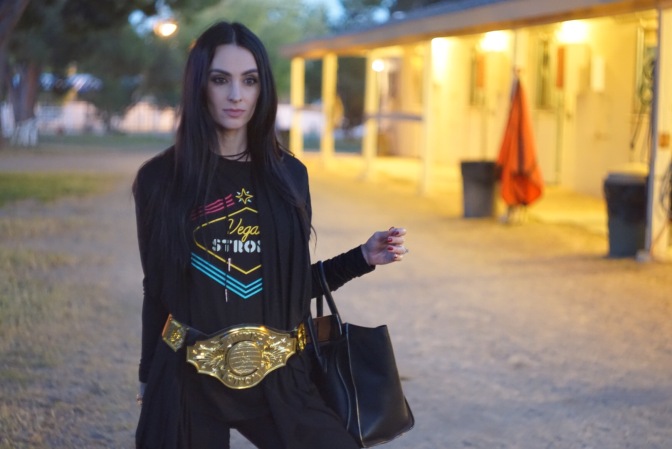 In addition to the costume contest, there was a Simon Says contest (which Oliver did not understand), a donut eating contest (which I clearly should have participated in) and, of course, a dance contest! When the DANCE PARTY started, Oliver needed to shed some skin and wings – he literally looked like the singer from The Darkness!! Shiny Pants and all!! 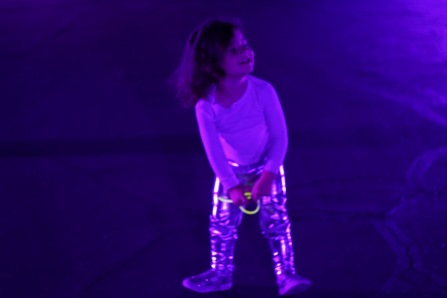 We were pooped after the dance contest and needed to get back to our Halloween Party planning – a quick stop for Thai food and then our one hundredth Target trip!

The next days were spent decorating the house, making treats for the kiddos, and stopping at our favorite bakery, Freed’s Bakery, to pick up some yummy spooks! 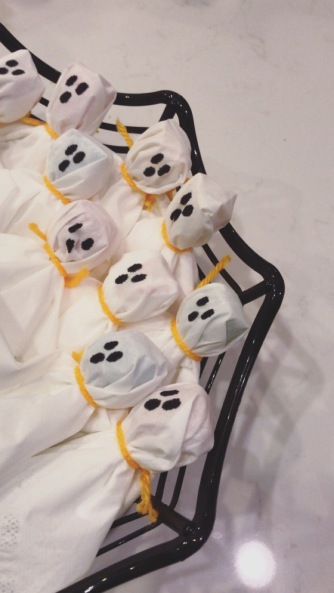 Oh, and the night before Halloween, Oliver’s teacher sent out an email informing us that the kids could wear their Halloween costumes to school on Halloween. Well, given the amount of times he had already worn the bug costume and the fact that he would likely begin to hate the headpiece about 10 minutes into class, we were on the hunt for a last minute new costume! Which, might I add, is not something I would recommend!

Nevertheless, we went to a Spirit Halloween store on Halloween eve to find a costume, and, in addition to wanting to make all of the scary animatronics come to life, Oliver fell in love with a Woody costume! It had the boots, hat and all!

Halloween morning, mommy and Oliver had the most fun getting ready for work and school! 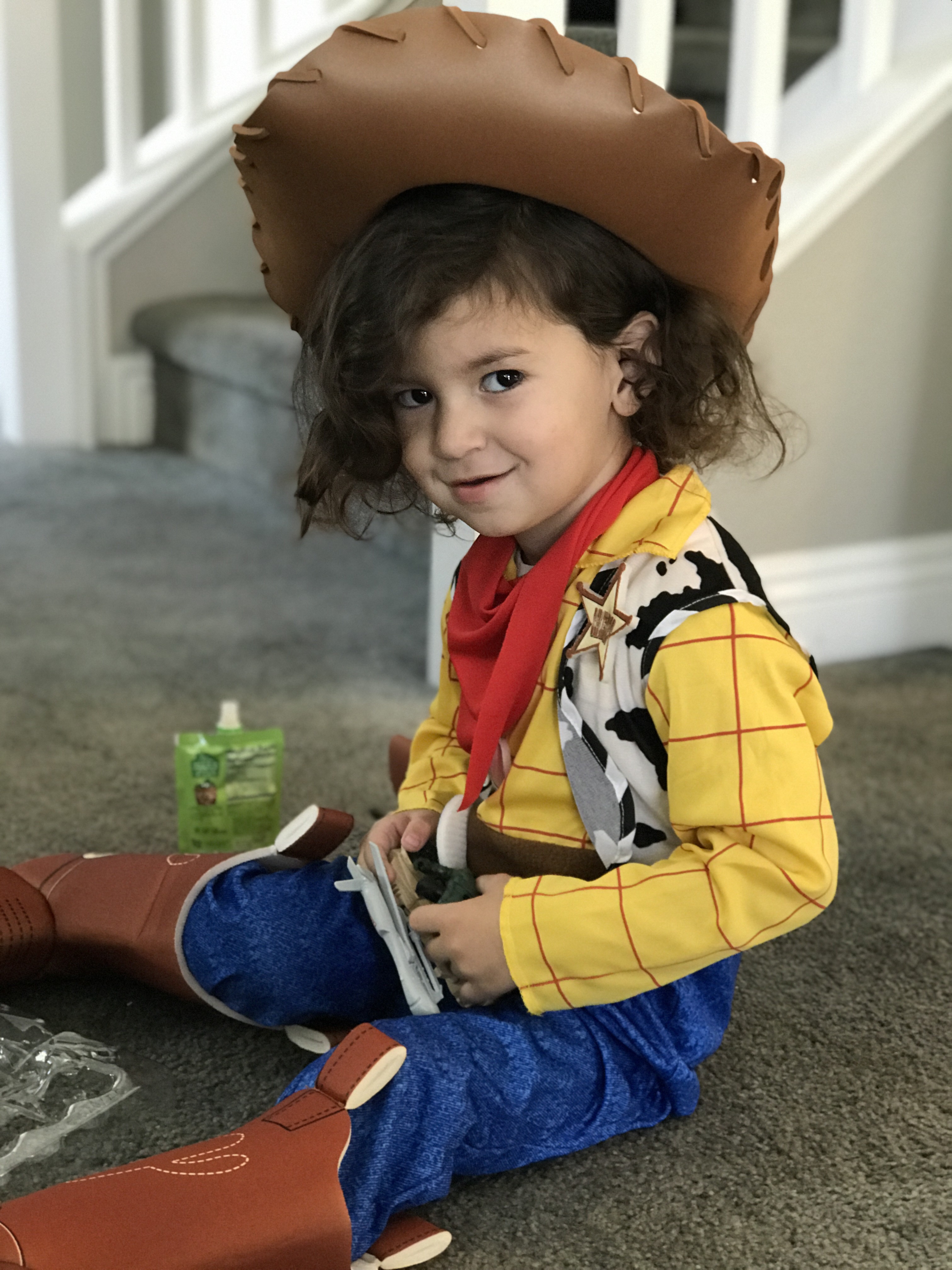 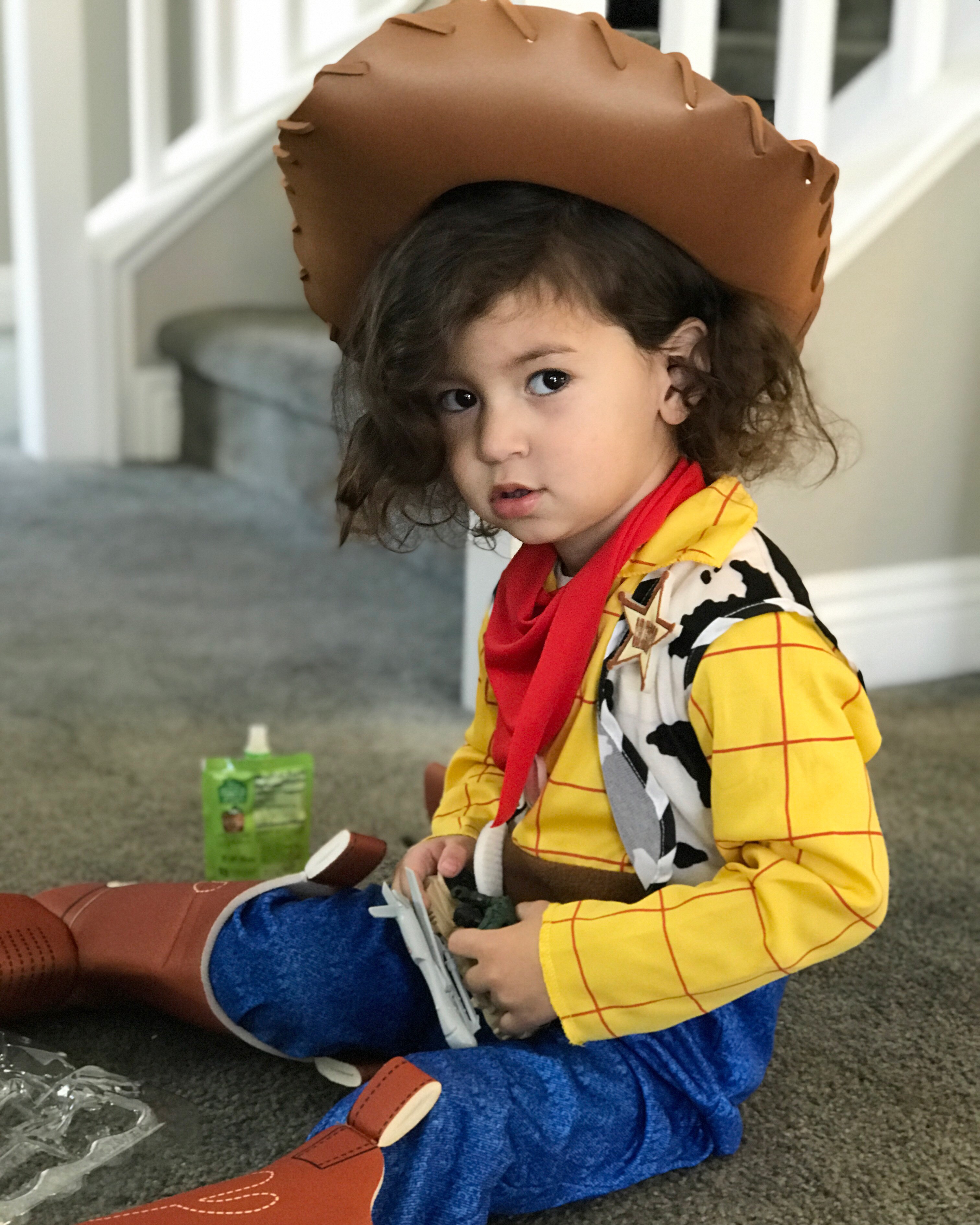 Moms? Are you in there??

I forgot to mention – My Wonder Woman costume was a super amazing find! 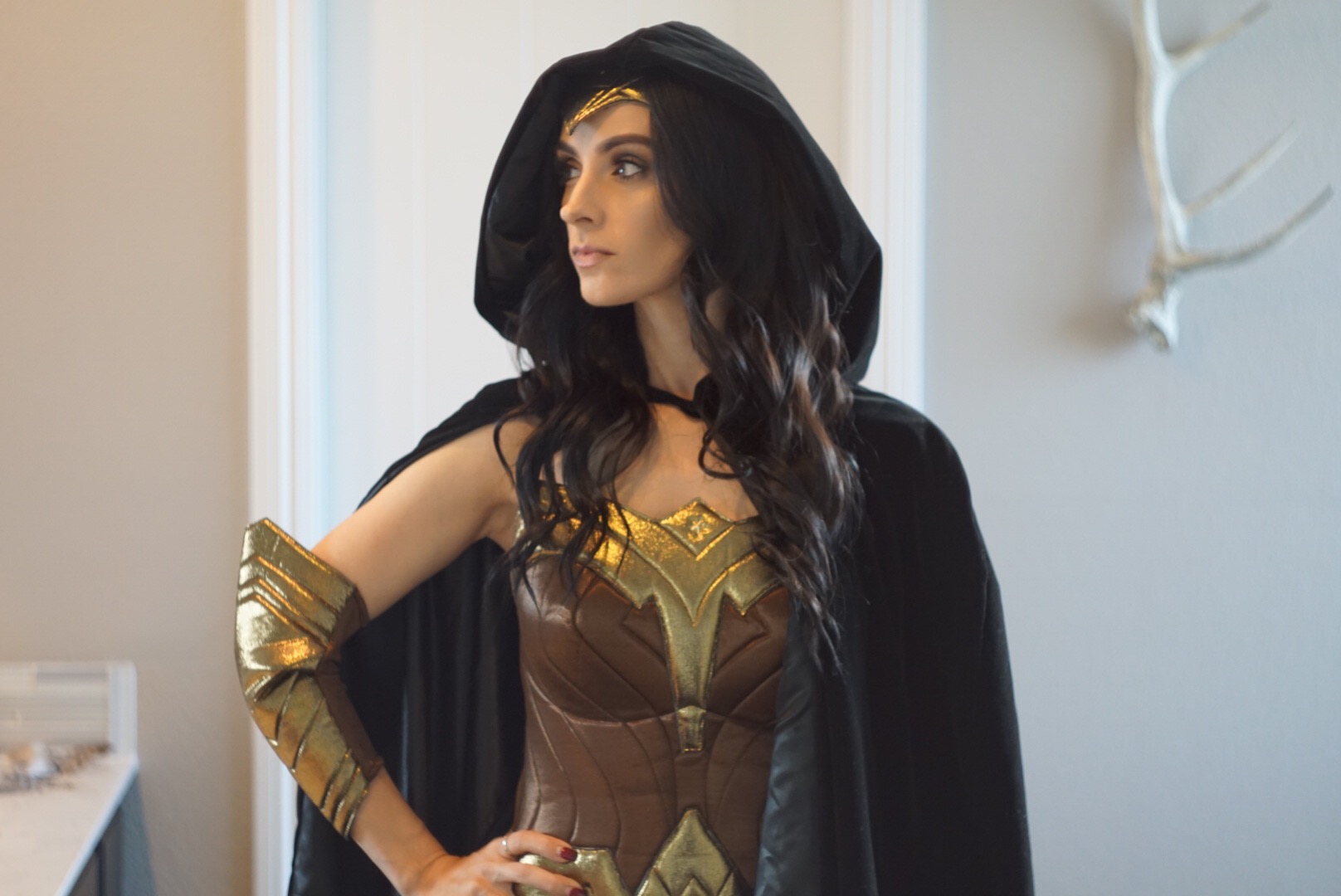 We always go into Star Costume here in Vegas a couple of days before Halloween, and meet with the AMAZING designer there, BOB, and literally say “Dress us!” He never lets down!

Last year we were Circus Freaks – yes, that is me in the beard, Oliver in the muscles, and daddy in the turban!

And one year he even convinced me to wear this Effie costume even though I had never seen the Hunger Games movie! Anyhow, back to this year. Oliver loved his Woody costume and was so proud to show it off to all of his friends at school! 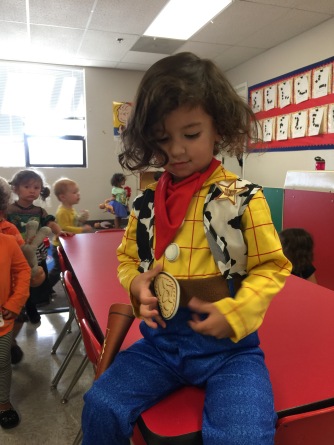 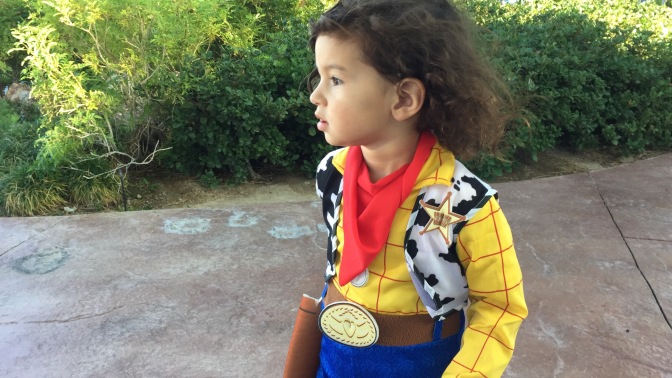 Mommy also had too much fun at work!  I found Batman and learned how a modern day super hero carries her sword and shield! haha! 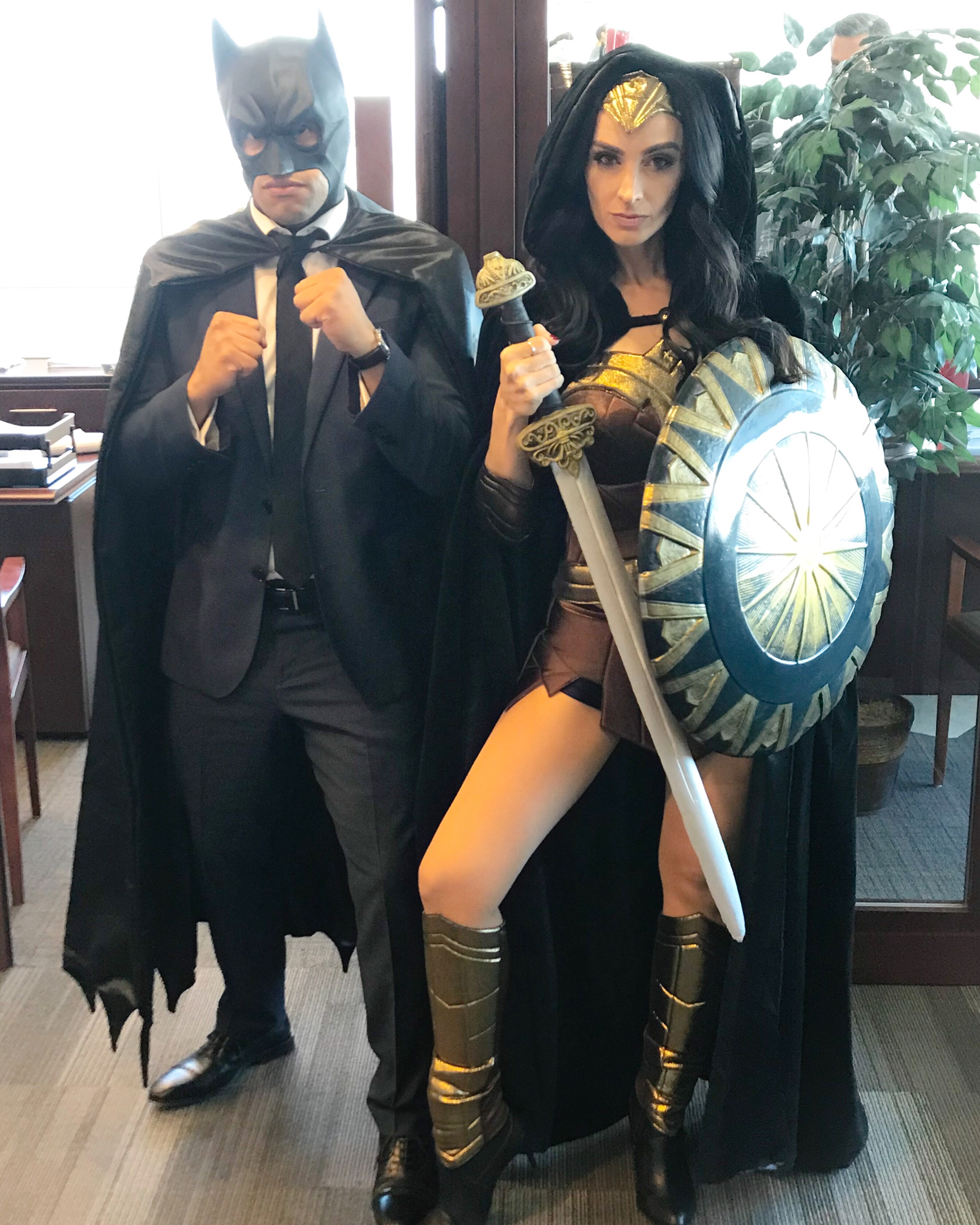 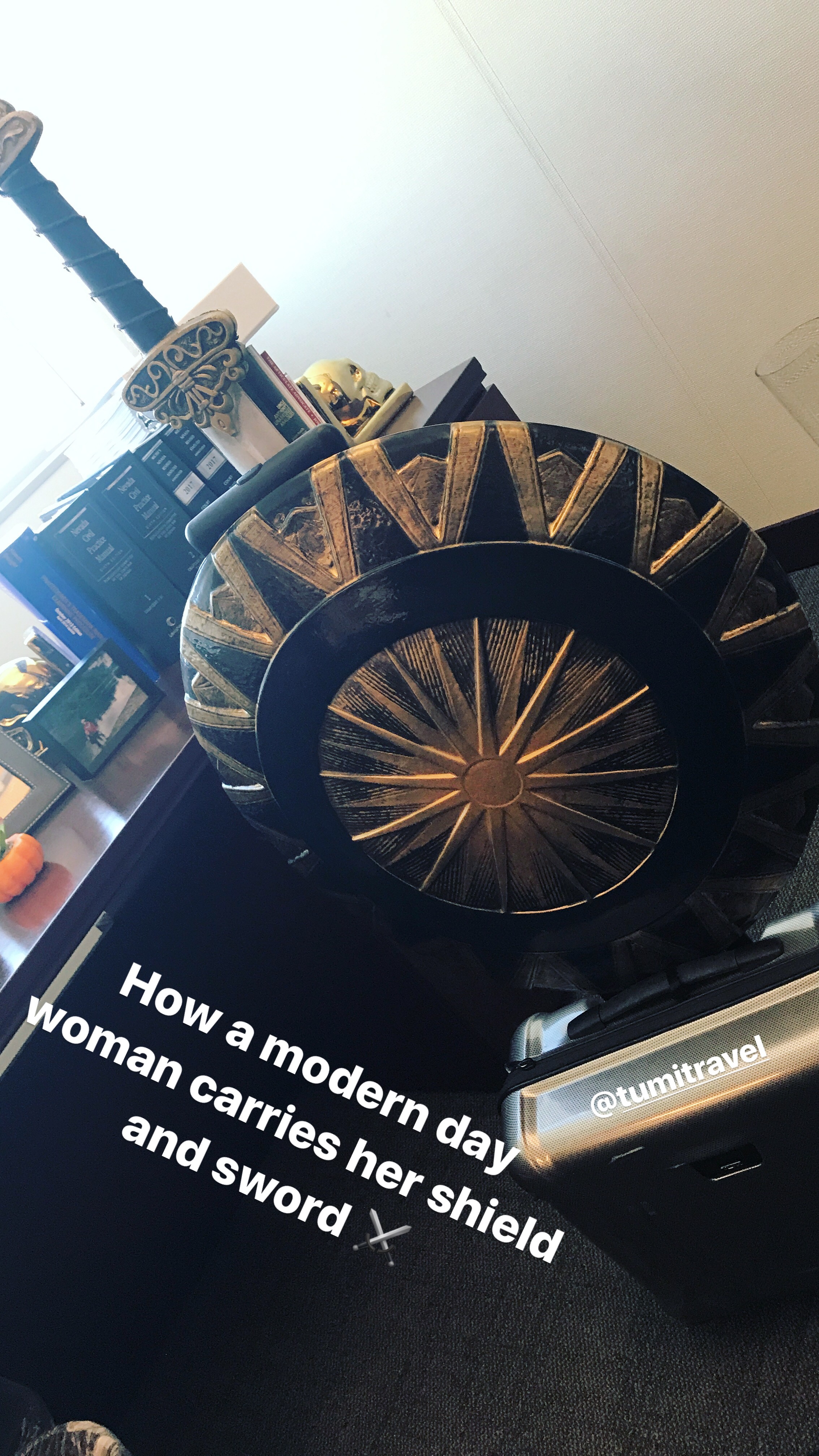 While I was at work, poor Freddy was running around town getting all of our last minute goodies, including a new car (check his Insta for all the details).

By the time mommy got home, Oliver was ready to party and Trick or Treat!! And Daddy, or should I say “Salt Bae”, was ready to cook some meat for the party – we opted for pizza instead!

After ordering the pizza, we scurried about to get all the last minute details ready to go, while Oliver danced around to Halloween songs! Lucky for me, my sister – the adorable gnome – was able to fix the Sangria when she arrived! Here’s the thing, when you are preggers, you can’t do any taste testing, and boy was I not a good estimator!

Either way, with the help of family, everything was ready to go when the guests arrived – Meat Head Skeleton and all! 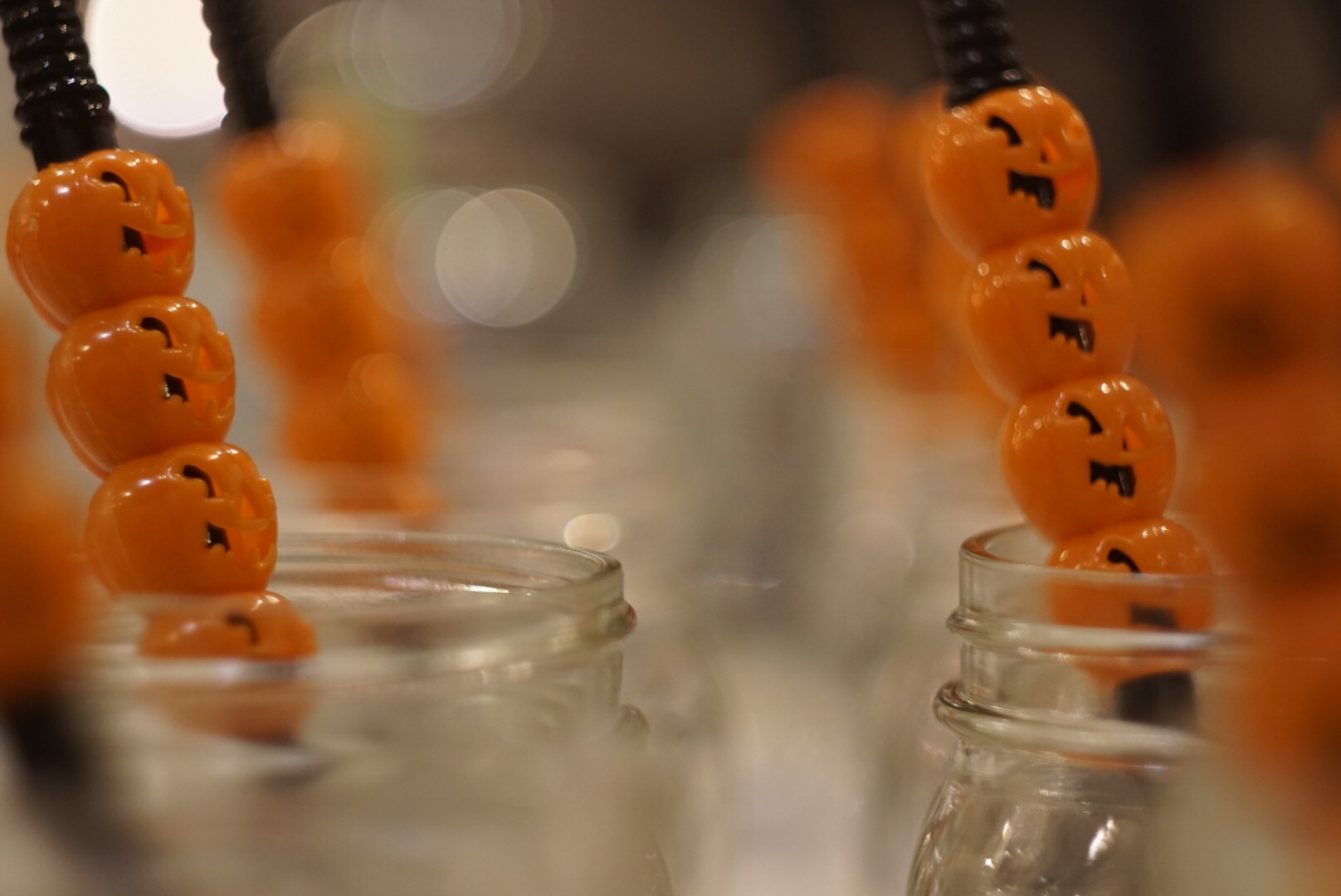 A party would not be complete without lollipop ghosts (childhood favorite)! 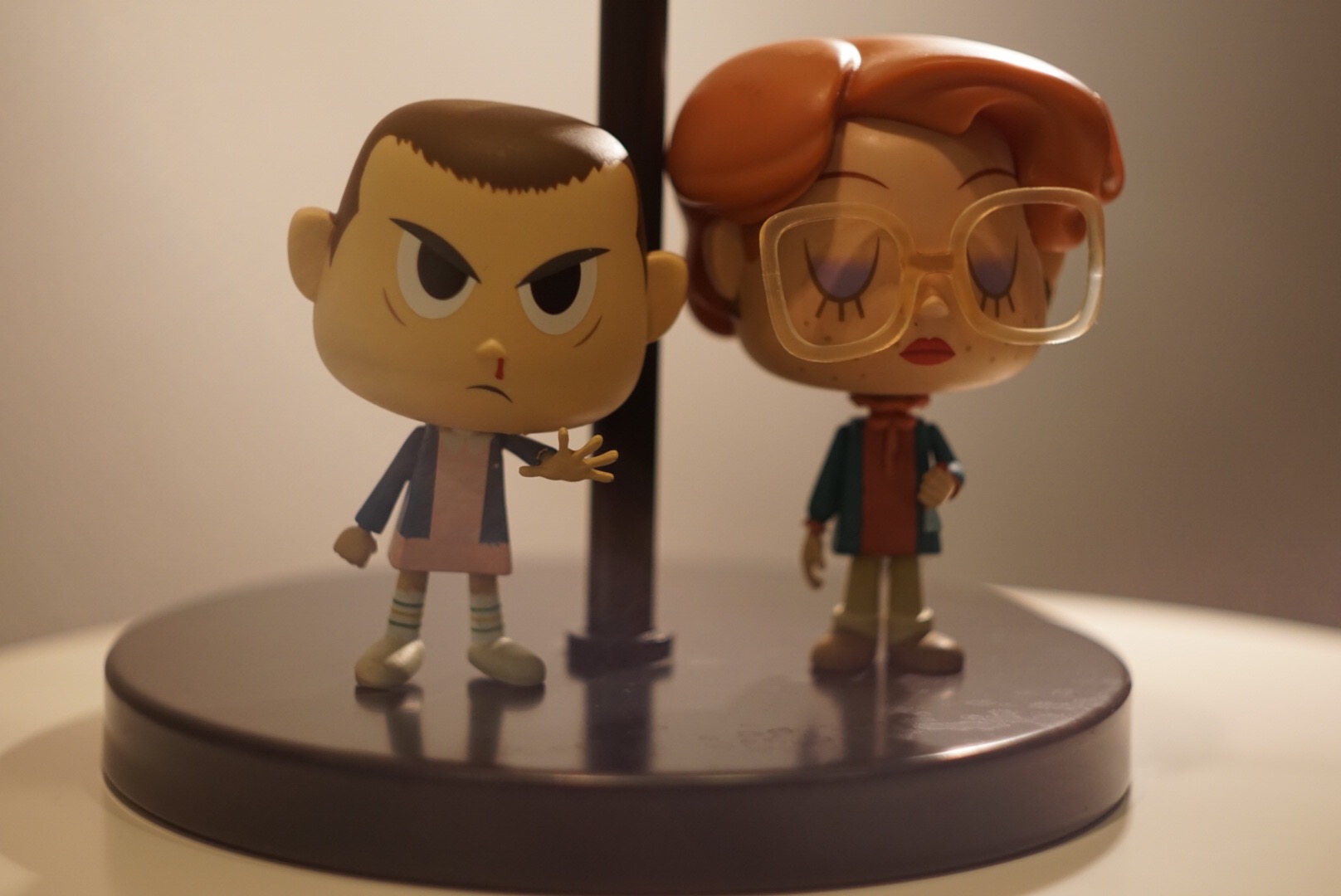 And obvi – Elle and Barb! 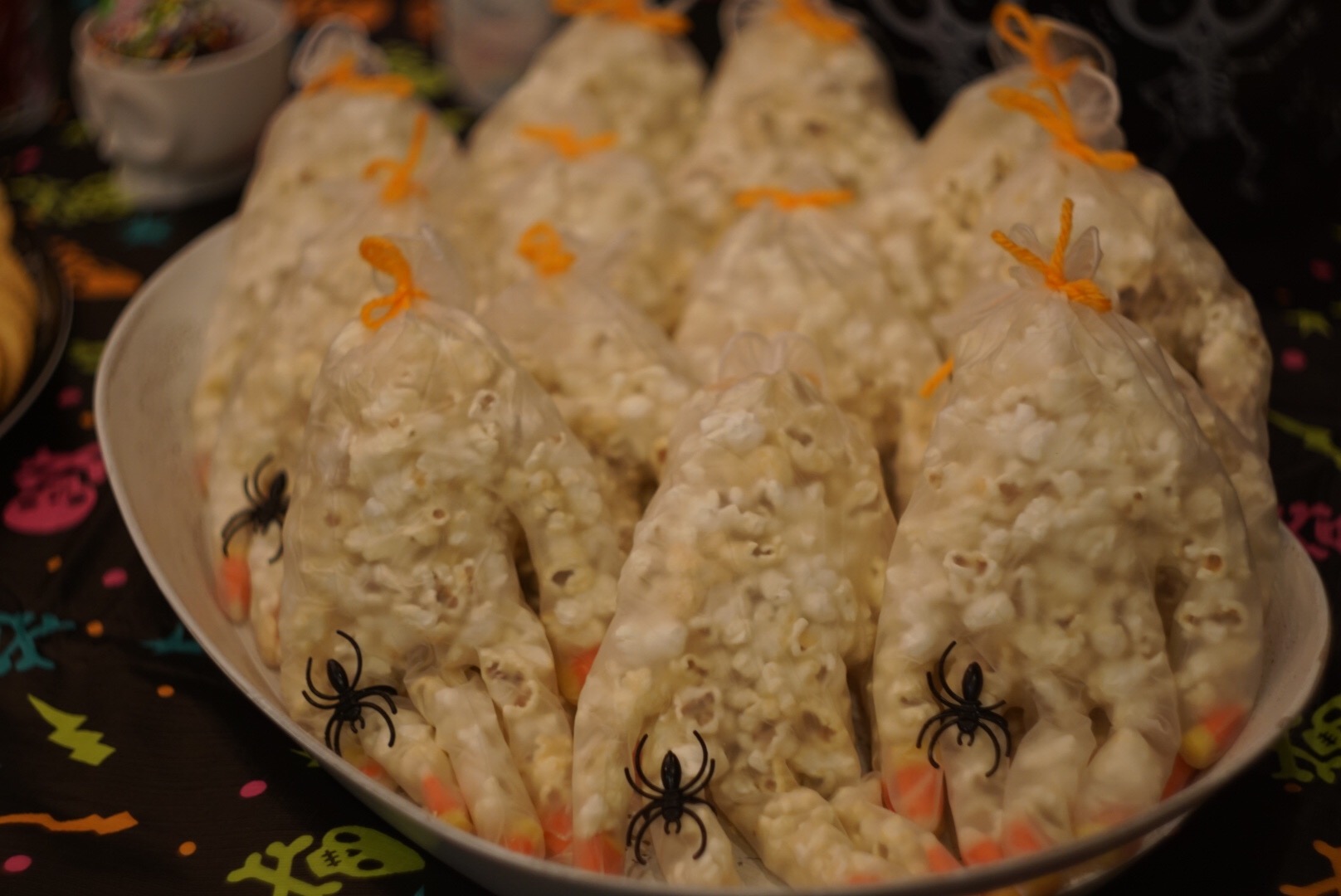 The Candy Corn nails are the best part of these spooky hands! 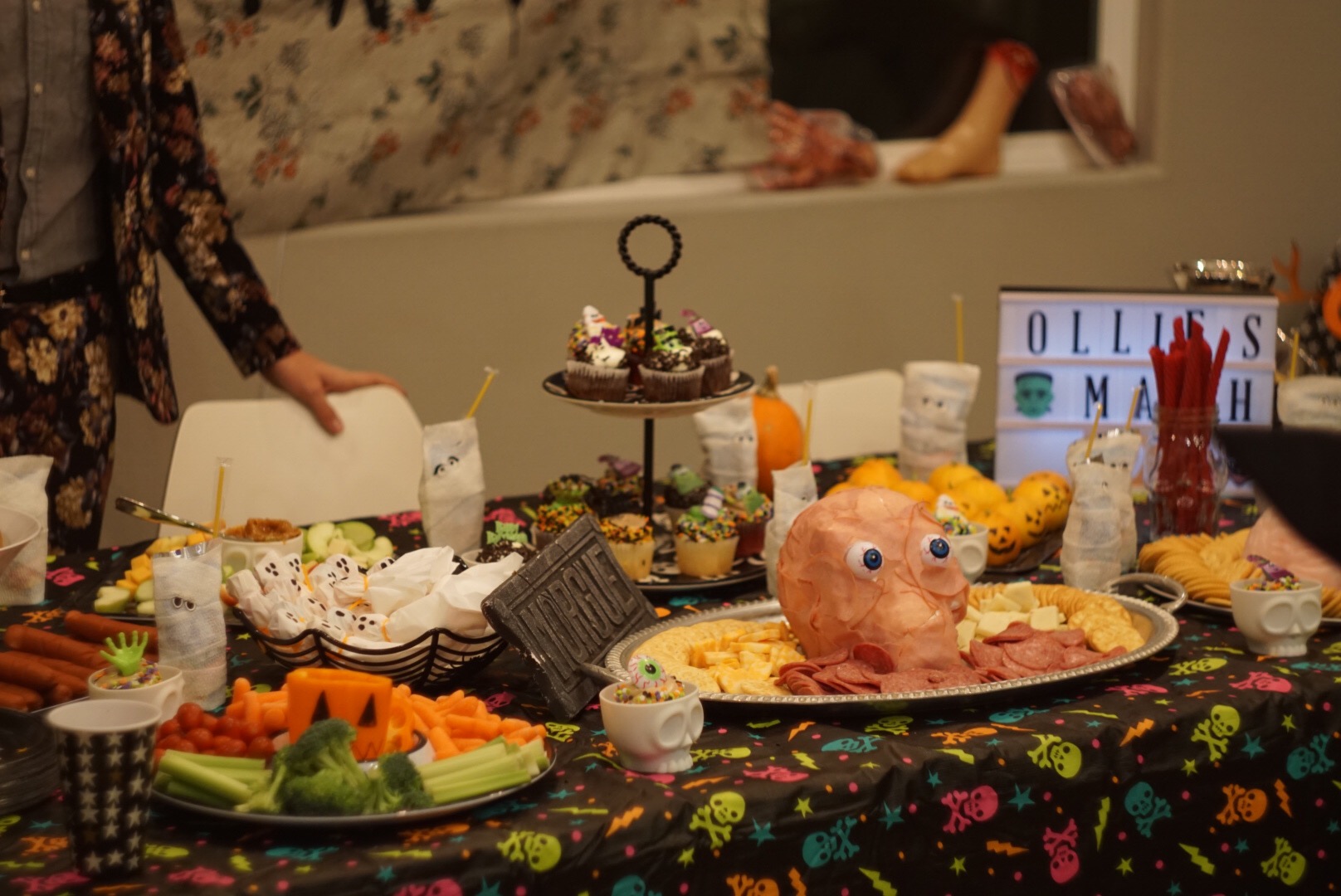 Oliver may have redesigned the “Oct” – he felt it looked better upside down! ha!

Oliver was fascinated by these Spooky Strawbabays! Thanks Freed’s!

As the guests started to arrive, Oliver was more excited than I had seen him all month – “Cousins, Friends, Halloween!!!” 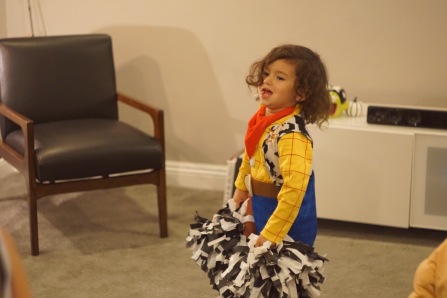 It wasn’t long after our party started, that the doorbell began to ring non-stop! This, surprisingly, was Oliver’s most favorite part! He ADORED running to the door and shoveling handfuls of candy to the neighbors, and he and daddy even invited some neighbors in for the fun! The more the merrier!

After everyone arrived, and we did our Monster Potato Sack Race, a Dance Party (Oliver shaking his tushie to Fireball), and took the obligatory Group Photo, we were ready for Trick or Treating Time!

With that, we were off! Now, because we were a big group, we got split up into two or three smaller groups – the bigger kids who could run from house to house, the littles who had parents dragging them down, and the stroller crew!

No worries though, we were never too far behind each other!

Oliver simply loved Trick or Treating, and was quick to whisper “Trick or Treat” the moment the doors opened, all while Freddy introduced himself to the different neighbors, explained where we lived, and invited them over- he’s a real Mr. Roger’s Neighborhood kind of dad! haha! Oliver got so excited with each house (and all the candy), that he started chanting “Next House! Next House!” – too stinking cute!!

Pulling Mommy while singing “Next House! Next House!” #BlurCity

When our (OR MY) feet got tired from walking the neighborhood and Oliver’s bag was almost too heavy for him to carry, we headed back to the house to check out all of the goodies he had received!

Just like I remember doing as a kid, Oliver immediately sat on the floor and poured out his little pumpkin sack to count (and eat) all of his treats! Luckily, he has enough aunts and a mommy to help with any candy that is “poison” – so we had to save him and eat it ourselves!

Had to get some pizza in as well! Two for me, One for you!

So – I can’t believe I went all this way without mentioning my favorite decoration! Our Stranger Things backdrop!

This was a last minute find at Spirit Halloween and we HAD TO HAVE IT!!! It provided the perfect photo opp and was super easy to put together! I secretly want it as our headboard – Freddy would never agree!

In case you haven’t seen the movie- this is us!

After taking all of the required Chief and Wonder Woman photos, I realized that I wasn’t taking enough Instagram videos! I love to capture our memories, and I was worried I had failed! haha! So, I asked Freddy to use my phone to take some videos of the party, and BOY WAS THAT A MISTAKE!!

He came up with this idea to do Boomerangs of everyone – the only catch is that he wasn’t actually taking Boomerangs, so it just ended up with all of us looking ridiculous! It actually was hilarious – and you can tell that he was really getting a kick out of himself!

Once I caught on that my Instagram was being used for ill purposes, I quickly retrieved it and saved our guests! We continued the night and had many more dance parties and ate way too much pizza! The night ended with a little Stranger Things send off….

It goes without saying that Oliver was not happy when his friends started to leave for the night – he just didn’t understand why????

It is probably also obvious that he did not understand that Halloween was, in fact, over the next morning! He insisted on wearing a skeleton shirt (which has a belly filled with candy – very fitting) and holding his Skeleton bird – which he wanted to bring to school soooo bad!

Oliver’s tummy wasn’t the only thing filled the next morning! Clearly, Mommy’s little pumpkin wanted to make an appearance, and the morning after Halloween, there was certainly a little POP!!! It made me so happy to see our little one saying hello to the world and “hello – you are getting tight” to my wardrobe! haha! Real life, maternity clothes are going to be my best friend soon!

Another fun baby-related event happened this week – Oliver felt the baby kicking for the first time and was soooooooo excited! He pulled his hand away immediately and told daddy that it was his turn and that he HAD to feel the baby kicking – it was too adorable! Now, every morning and night he puts his hand on my belly just in case his baby is awake (my heart melts every time).

Now, I’d like to be able to end there, but once Oliver got wind that Halloween was truly over, it was not a good day!

While in Target getting some wrapping paper for his cousin’s second birthday in California – which will be featured in the next blog – Oliver begged to go to the Halloween section. Much to his dismay, it was all G O N E!!

As you can tell from his expression, he was devastated that Halloween was donezo.

I am happy to report, however, that he has since somewhat embraced Christmas – Thanksgiving doesn’t have enough spooks and doesn’t have Nightmare Before Christmas, which is a beautiful mixture of both holidays (thank the Lord)!

Hopefully, I will be able to report in the next blog that Oliver has fully given into the Thanksgiving holiday – Hey, it has pumpkins right?!?! Fingers crossed!

Thank you for reading and joining us on this journey!

This is a text widget. The Text Widget allows you to add text or HTML to your sidebar. You can use a text widget to display text, links, images, HTML, or a combination of these. Edit them in the Widget section of the Customizer.
%d bloggers like this: